When I did my first test of importing my own issuers, the following error occurred: 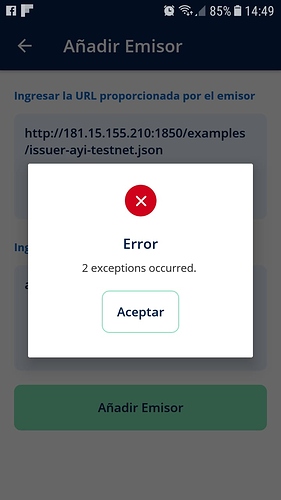 I performed tests on multiple devices and I was able to reach a conclusion:

The error of the previous image is always generated in devices with Android 7.0 or less, in Android 8.1 it works correctly, and finally, in Android 9.0 it generates a different error: 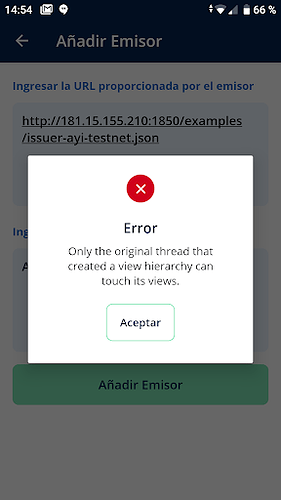 I was researching about the last error, and I found that it is a coding problem (https://stackoverflow.com/questions/5161951/android-only-the-original-thread-that-created-a-view-hierarchy-can-touch-its-vi).

Leaving aside Android, in all IOS devices it worked without any problem.

What can be done with these errors? How can I know the cause of the first error?

I think the error reported here is different than the one linked to by @aronning.

The new one reported by @Marcoskrenz affects Android 7 or less. We also had a similar error report from a user last week – they’re using a Nexus 6, running Android 7.1.1 (nougat). He gets the “Error 2 exceptions occurred” message.

I’ll open a separate issue on Github about this new one.